Week 18 started off in dramatic fashion with the Tater Team onsite for the Idaho Potato Commission’s national commercial shoot in Dallas, Texas.  As if a nod to the success of the giant tuber’s maiden voyage, the commission selected the truck to be the star in this year’s campaign in what promises to be an entertaining spot.  The Tater Team, of course, was pretty excited about their selection.  The trio spent two days on set learning the ways of ‘the biz’ and even getting a little camera time themselves.  With such a front loaded week the team worried that the days to follow would be pretty mundane.  But for the second time on the tour (and perhaps in their life) they were wrong.  Later in the week the team landed the ‘ID Spudnick’ at Space Center Houston where an astronaut became the first space man to ever set foot on the colossal tuber.  The week came to an end in San Antonio where the team was hosted by Bill Miller’s BBQ.  It was here that we found our most enthusiastic Texas fans, the best sweet tea in town, and a wonderful shredded brisket sandwich. 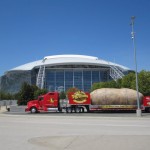 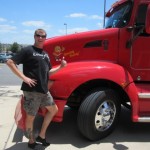 Texas just wouldn’t be Texas without spotting some longhorn; and I suppose it wouldn’t be the same without the absolutely astounding, Cowboy Stadium; no matter where we go, Spuddy seems to remain a fan favorite

Monday and Tuesday were two very long days that consisted of a combined 24 hours of filming in order to get 15 seconds worth of material.  But even though the clips of the truck and the team will be short, they got to experience the whole gambit of activities.  The first day on set they got to mix and mingle with the extras and dine with the directors and crew.  After a series of shots, the whole crew headed to downtown Dallas where the Big Idaho Potato was quite a spectacle wedged in between the skyscrapers.  The Tater Team reports feeling like royalty as they had a motorcycle police escort zipping around to block traffic.  It was an unusual site for the Texans, and their faces were unable to mask their surprise. 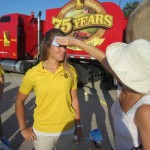 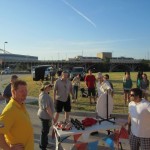 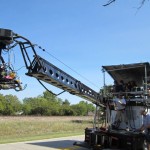 Kaiti living her dream as she is pampered on set; setting up for some of the first shots of the day; on Day 2 they pulled out the big guns to get the good shots

The second day of shooting called for a whole new array of shots in the beautiful Texas countryside.  It was during these shots that the crew busted out all of the fancy equipment and booms in order to get the right angles.  Unfortunately, however, everyone had to hold their breath at one point as the boom dropped a little and almost caused an $80,000 camera setup to catch the chain on top of the potato.  A couple deep breaths and a few tongue lashings later and we were ready for round two! For the Tater Team it was also a day of self-learning. Ellis learned that his improv skills are passable at times; Kaiti learned that she is capable of yelling “Idaho”, “Number one”, and “woohooo”, repeatedly for 30 minutes straight; and Paul, little surprise to everyone else, that he is not funny.  It was a bitter sweet deal when the director radioed in “that’s a wrap”, but at least the team walked away with some unforgettable memories that will never go away… partially because they recorded the whole thing. 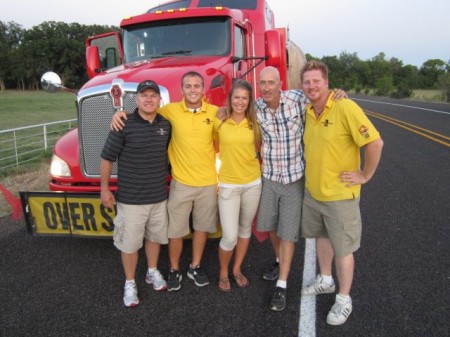 July 20, 1969, marked an amazing milestone for not only the United States but for all of mankind.  This was the day that astronauts Neil Armstrong and Buzz Aldrin became the first humans to ever take steps (and leaps) on the moon.  It was truly a historic moment that was only repeated by a handful of other people in the following years.  But since that date NASA had yet to put an astronaut on a new and equally impressive frontier… until now.  Around 43 years later on August 3, 2012, that all changed with the placement of Astronaut Clayton Anderson on top of Idaho’s 12,000 lbs tuber.  After a short ladder climb, Mr. Anderson became the first ‘space man’ to walk on the Big Idaho Potato.  Everyone appreciated him coming out especially the Team who were graced with an autographed photo. They spent the rest of the day touring Space Center Houston and taking in some of the most exciting and interesting discoveries in the scientific world. 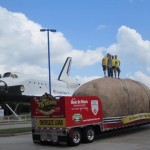 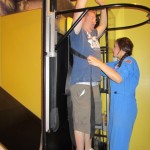 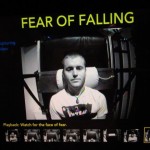 The Tater Team along with Astronaut Clay Anderson on top of the ‘Spudnik’; Paul getting strapped into the ‘terror’ machine; Ellis showing NO fear whatsoever

No week would be complete without a delicious food stop.  And since we were in Texas we figured the only suitable stop would be Bill Miller’s BBQ in San Antonio.  This Texas favorite is known for their delicious food and world famous sweet tea.  Thanks to a plug from a local news station, the Team was bombarded with fans that just had to see the biggest potato in Texas! This was a huge relief for the Team who were kind of afraid that the Texans would see their bet and then raise them a few thousand pounds (you know what they say, EVERYTHING is bigger in Texas).  At the end of the day though, the Idaho spud still held the title.  Sonny Melendrez, a local celebrity in San Antonio, confirmed this when he stopped by and hung out with the team.  His energy helped fuel the crowds who became ecstatic at the sight of the two big stars together in the parking lot of a delicious local eatery. 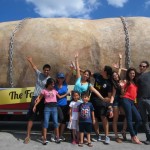 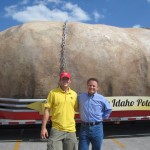 The biggest group that made their way out to see us in San Antonio; Ellis posing with local superstar, Sonny Melendrez

In between all of these exciting events the team was still able to meet the genuine people who continue to make this tour a success.  In Dallas it was a girl who is obsessed with potatoes to the point that she asks for them for her birthday; in Houston it was an anonymous girl who kept trying to track down our truck; and in San Antonio it was a big eyed little Texan who was actually born in Boise, Idaho.  These are the advocates that keep us going and we can’t wait to see who will come out and see us next week. However, in the meantime we are going to go and watch 1.5 million bats fly out from under Congress Bridge in Austin and eat amazingly creative tacos from Torchy’s… wish us luck as we try to dodge the guano! 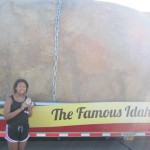 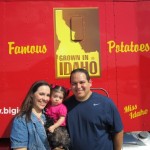