In July of this year, Saratoga Springs is going to be holding a new festival dedicated to a particular potato category.

It is one which seems to have been missed by all other festivals where products can go toe to toe with their peers. From the chili festival the previous week, we learned a bit more about how much fun such things can be. This time we were invited to attend the official announcement for the first ever Potato Chip Festival. http://www.thechipfestival.com 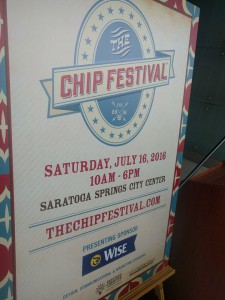 The potato chip was invented by a cook who was trying to appease a difficult customer. Potato chips are not to be confused with the earlier version of potato crisps, invented decades earlier in England. Crisps were done in both a thicker fashion and in one that more closely mimics shoestring potatoes. Thin potato slices deeply fried don’t appear until 1853 when George Crum finally satisfied his customer. This is one of the few times we get to write about something that has yet to actually happen, so you can still attend this festive event.

Our next stop found us at Petes market in St Louis Missouri. We were set up there trying to raise bike safety awareness. The weather was supposed to be rather grim, but it held off long enough for us to raise enough signatures to buy almost 50 new bike helmets for kids. The wind did get to play around with us though. It kept blowing many of our props down and even blew the butter off the Big Idaho Potato. Guess we have to find more.

There are a few things in the U.S. that one simply must do. Seeing Yellowstone is one, visiting the Giant Redwoods of Northern California is another, hiking in the remote wilderness surrounding McCall Idaho is a third. We weren’t in those places, but we did stumble upon something within St Louis that easily competes, especially if you either are a kid or have enough inner child waiting for every opportunity to burst onto the stage and shout “I am Alive!”

Yes, there is magic in St Louis. 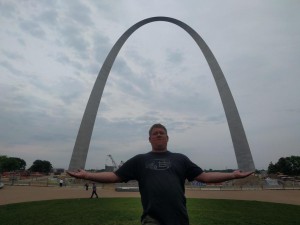 I’m not talking about the Jefferson National Expansion Memorial, aka the Arch. It is an architectural wonder for sure and really neat to visit, (even now, while the area under it is closed off for a facial.)

I wont bore you with the details of my actual age, but I’m a bit over twenty and thoroughly enjoyed myself here. Suffice to say this is an experience for adults as well. I will add this warning though, you will lose your children so plan carefully before you enter. You should make sure you have a good system of return and a ton of patience because it isn’t easy for anyone let alone a small child to find their way. You can follow them through much of it, but you will be crawling for most of the day. Fear not though, it is such a treat that I doubt you will even notice how much energy you’d burned through until they’ve announced they’re closing and have pulled out the cattle prods to help you decide too that their work day is over and it really is time to stop exploring. There are passages of many shapes and sizes some of which I couldn’t follow Ellis through. 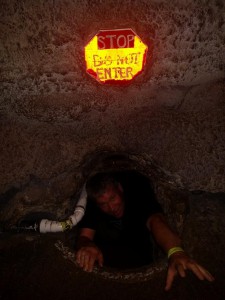 Often times you will find yourself at the end of some long passage, now out and exposed to the world high up on the ceiling and feeling much like you’ve made some bad decisions of late. 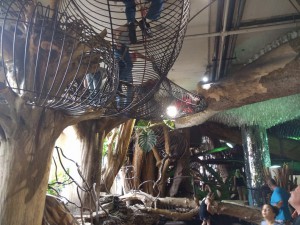 Never fear though, as there is so much to explore that you can turn back and easily find another passage of fancy.

There is both an inside as well as an outside to the City Museum but if the day is grim there is plenty of things to do inside. Ellis and I made a point to have time to explore the outside areas but even after hours of fun, we had yet to quench our thirst for the inner workings. They are still improving it though, so we can always come back again. You can be assured too, that we will. As you may know, we drive a giant potato around the country, so when you think of a bus sticking over the edge of the top of a fourteen story building with a couple planes on small towers out back…you know we’re ready to explore. All in all St Louis was a find end to the week. 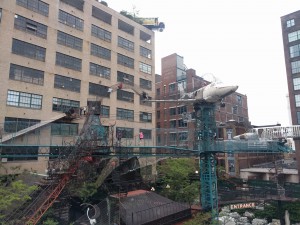 Sidekick to the Spud Studs