During this week of the Famous Idaho Potato Tour, the trip was marked with ‘long hauls’ and ‘long stalls’.  Memorial Day gave the Team a long beautiful weekend in Pennsylvania’s Wilkes-Barre just south of Scranton which is home to a very popular, yet very fictional, paper company.  Ellis spent the afternoon soaking up the sun while teaching Kaiti how to throw a football and frisbee in the overgrown courtyard of their hotel.  The downtime prepared the Team for what would turn into a nine-hour drive to Boston, Massachusetts, thanks to excruciating traffic in Hartford, Connecticut. But regardless of the abundance of ‘truck time’, the Tater Team was excited to hit the East Coast.  They wrapped up the week in New Jersey (just outside of New York City) from where the Team will be steadily marching south for the next month.  I have to think that the birds will be questioning their strategy, but hopefully the Southern Comfort will help them beat the heat! 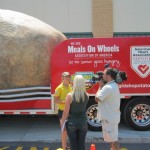 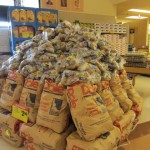 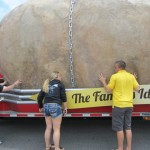 Welcome to Boston, AKA Beantown, home of the Red Sox, Celtics, Patriots, Quincy Market, Boston Massacre, USS Constitution, narrow streets and low bridges.  So, obviously, this is the perfect setting for a 72 x12x13.5 foot truck and potato.  Paul was ecstatic to show off his eight years of experience as he nimbly traversed the treacherous roadways of Boston. And show off he did.   The Irish descendants in the area were lining the streets; shouting, waving and even chanting his name… Okay, so maybe I made that last part up, but there were certainly a lot of Irish descendants.  And if their ancestors taught them anything, it is the importance of a good potato.  One lady still had traces of an Irish accent mingling with her Bostonian accent, which it turns out is very pleasing to the ears.  She was absolutely captivated by our mighty construction and made sure to take extra post cards to share with her father, a real live potato farmer over in the motherland! 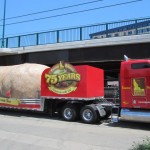 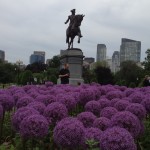 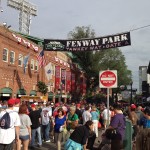 Beantown didn’t leave a lot of clearance for our giant russet; a beautiful view from Boston Commons; whether you love the Redsox or hate them, Fenway lies in every Bostonian’s heart

After Boston, the Team headed south. And let me tell you something, even though these states in the East may look real small on a map, driving between them makes them seem as though they are worlds apart.  Their trip to East Hanover was yet another nine-hour trek.  Luckily for the Team, Redboxes are in abundance… because movies help pass the time… unless of course you are the driver… sorry Paul. The final destination for the week was a fitting place for the Big Famous Idaho Potato: the Garden State.  Visitors made pilgrimage to see the ‘meal on wheels’ from over 30 miles away just from hearing about it online.  The big potato impressed even the big city folk, and for once the people in these parts couldn’t help but find the humor in the cause of some of their traffic congestion: a Great Big Idaho Potato. 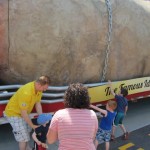 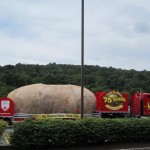 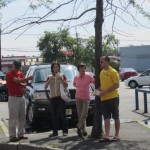 For those too small to reach, Paul is there to lend a hand; the Big Idaho Potato set against a lush New Jersey backdrop; Ellis talking to the trio who ventured many miles to see the spud

On the last day of the week, Sunday, Kaiti, Ellis and Spuddy ventured into the Big Apple. Unfortunately, there was no room for the Big Potato.  The trio paid tribute to the 9/11 Memorial, stood in line for over an hour at Grimaldi’s Pizzeria, indulged their taste buds at Max Brenner’s Chocolate Shop and took an evening stroll in Central Park.  And after having spent two months on the road with a giant vegetable, the Team was proud to say that the city nicknamed after a giant fruit, known to grind down the bravest of souls, did not get the best of the Tater Team. 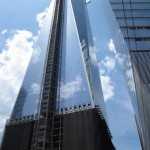 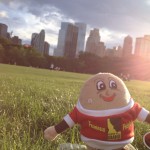 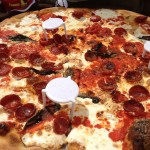 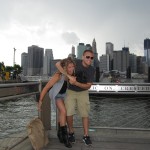 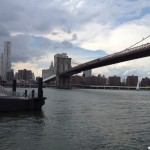 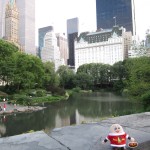 Ellis demonstrating a headlock on Kaiti with the New York Skyline behind them; the Brooklyn Bridge; Spuddy in a romantic pose on a bridge in Central Park

The Famous Idaho Potato Tour is vamping up to bring some big events your way! Be sure to follow us on Facebook so you don’t miss out on any opportunities to win prizes, watch our videos or be our FAN OF THE WEEK! Right now you can submit pictures of yourself along with our Giant Idaho Potato for an opportunity to adorn our cover photo in true stardom.  Only the truest of Idaho potato lovers need apply!

The Tater Team sets the bar for our Fan of the Week contest!