The Capitol and Beyond

If you thought this week was going to be slower than the week before, you thought wrong.  In a week filled with BIG events, the crew rose to the occasion and successfully executed events that helped elevate the Famous Idaho Potato Tour’s status fivefold! It helped that the Tater Team was immediately welcomed as they entered the Baltimore area with two news stations, Fox 45 and WBAL 11, opening their arms to put them on live segments. Both stations offered fun little features that plugged the Team’s schedule and purpose for the week.  This helped to get the ball rolling as they traveled south for their big debut at the nation’s capital: Washington D.C. 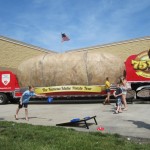 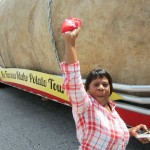 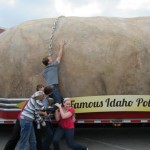 Idaho Potato fans get active as they try to win prizes with our ‘spud’ hole game; some get real excited… but we welcome the enthusiasm; a few ambitious fans try push their luck as they try to mount the great tater

The crew rolled into Washington D.C. on official business that warranted a front row parking spot behind the Capitol Building.  The celebration they were there for was much more joyous than the weather as President and CEO of the Idaho Potato Commission, Frank Muir, presented the CEO of the Meals on Wheels Association of America, Enid Borden, with a large check (literally) for $100,000. As many of you probably know by now, the Idaho Potato Commission partnered with Meals on Wheels to aid them in reaching their goal of ending senior hunger by the year 2020. Also in attendance were Idaho Senators, Mike Crapo and James Risch. The two senators lent their support and were presented with very large and very symbolic “keys to the truck.”  It was a VIP event that attracted throngs of tourists and displaced Idahoans which helped to make the event extra special. 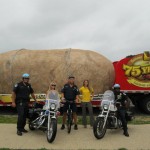 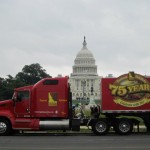 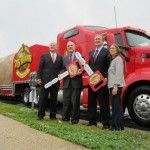 Even the local law enforcement took some time to enjoy the Big Idaho Potato; Miss Idaho and our beautiful trailer create a nice frame for the Capitol Building; all of the VIPs pose for a shot with larger than life truck keys

From the Capitol Mall the Team packed up and headed to see their sometimes friends and sometimes foes at the United States Department of Agriculture (USDA).  The Big Idaho Potato was parked right in front of the gigantic building with its American Heart Association Certification winking at all who gazed upon it.  This showing was to thank all of those who support the often misunderstood potato and to remind the opposition that potatoes are one of the few healthy vegetables that children actually enjoy eating.  The D.C. events were followed with a dual celebration to celebrate the afternoon’s success and to wish Frank Muir an early birthday… I can only assume (going off looks) that he is 32 years old.  Frank and the Tater Team were accompanied by the IPC’s VP of Legal and Government Affairs, Pat Kole, and Ellis’ girlfriend, Irina Ruoff.  The Crew shared stories and laughs as they caught up on all that had happened since their last encounter in Chicago. 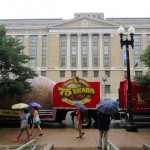 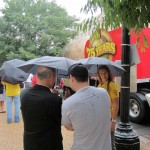 Frank Muir gives an interview outside of the USDA Building; tourists get more than they bargained for as they head in to D.C. for the day; Kaiti is ‘mean muggin’… somehow looking more intelligent than usual 😉 (we love Kaiti)

Now if you have ever been to a Five Guys Burgers and Fries you should not have a hard time figuring out why they stopped in at the corporate office and corporate store in Lorton, Virginia.  It is no accident that the company has world famous fries and they even brag about where they source their potatoes.  And if the stacks on stacks on stacks of Idaho potato sacks are not enough of a clue, then all you have to do is look on the white board next to the cash register.  They understand the simple principle that the quality of their food can be no greater than the quality of their ingredients.  And this is why they choose the Idaho Russet.  In fact, they are the primary user of the nation’s #2 Idaho Russet Potatoes and use 5% of Idaho’s total potato output!  Needless to say, they have good taste.  This taste was put on display as they turned out to be our most enthusiastic office visit to date! 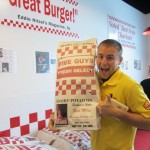 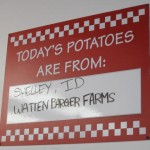 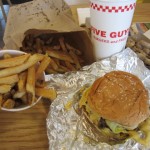 Ellis easily manages a 50 lbs sack of potatoes at Five Guys’ Headquarters; as promised Five Guys advertises where their fries are coming from; the Tater Team was treated to a delicious meal, just look at how beautiful and gold those Idaho fries get!

Friday had a real sentimental appeal to it as the Big Idaho Potato made an appearance at the BJ’s in Henrico, Virginia.  As everyone should know by now, the amazing travelling spud was created by Chris Schofield and Sharolyn Spruce of Schofield Design in Weiser, Idaho.  To our great pleasure, their family was able to drive up from Blackstone, Virginia to see the incredible spectacle their son and daughter-in-law created.  Mother, Grandmother, Sister, Step Father, and Brother-in-law were all in attendance to take pictures, collect their 75th Anniversary shwag and even answer some questions for a Richmond newspaper.  Once they had their fill of potatoes they headed home… content and proud. 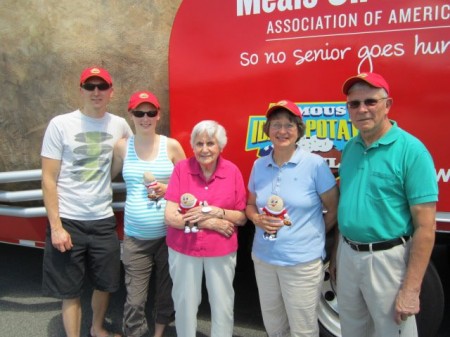 The wonderful family of the creators at Schofield Design

The rush of the past two weeks helped the Team welcome a much needed break in Virginia Beach.  Constantly travelling can grind down even the toughest of road warriors… and that is why there is the beach.  It balances this world against all that is crazy and hectic.  The sea breeze in your hair, salt on the skin and sand in your pants is a combination that brings comfort to the most troubled of souls.  And that is why it is time to wrap up this week’s update.  The sun is out, the swell is coming and their pasty bodies could use some vitamin D! So please excuse them as they head to the shore and recharge their batteries.  Many guests have come and gone and they will surely have more along the way.  But it is inevitable that all eventually depart, only to leave, once again, the Tater Trio and their Big Idaho Potato to continue on across the country.  Four and a half months left on this incredible adventure! 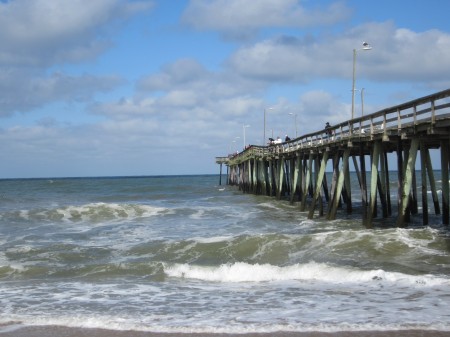