After a 7 day cross-country road trip, we finally arrived at Hilton Head Island, South Carolina! Upon arrival, we were warmly welcomed by Jim Lafarriere, the entertainment chairman for the St. Patrick’s Day Parade. Jim was so helpful and even gave us a tour of the town, and introduced us to local business owners and committee members! Additionally, when we checked into our hotel, the Holiday Inn Express Hilton Head, the staff was elated to see the truck, and hotel general manager, Anita, even recorded a Facebook live interviewing the team and showing the world our 6-ton spud! We felt so welcomed during our stay in Hilton Head and the locals were so friendly.  When we walked around town, people greeted us and often referred to us as the “potato people!”

Click the Link to watch our FB Live with Anita!

On Saturday, we had an event at the Hilton Head Island Kroger supermarket. It was a beautiful day on the Island and we were excited to escape the Idaho cold! We met people from all over the country who were visiting the Island.  Special fan, Phil Strout, visited the truck and brought his Pontiac Firebird Trans AM, the same car from the hit movie Smokey and the Bandit! Tater Twin, Kaylee, was even able to sit in the driver seat and pose with the car. We also had a signature board at the event for the Muscular Dystrophy Association. Kroger markets across America partner with MDA and have raised over 30 million over the years. It felt great to bring the community together, and there was a great turn out at the market! 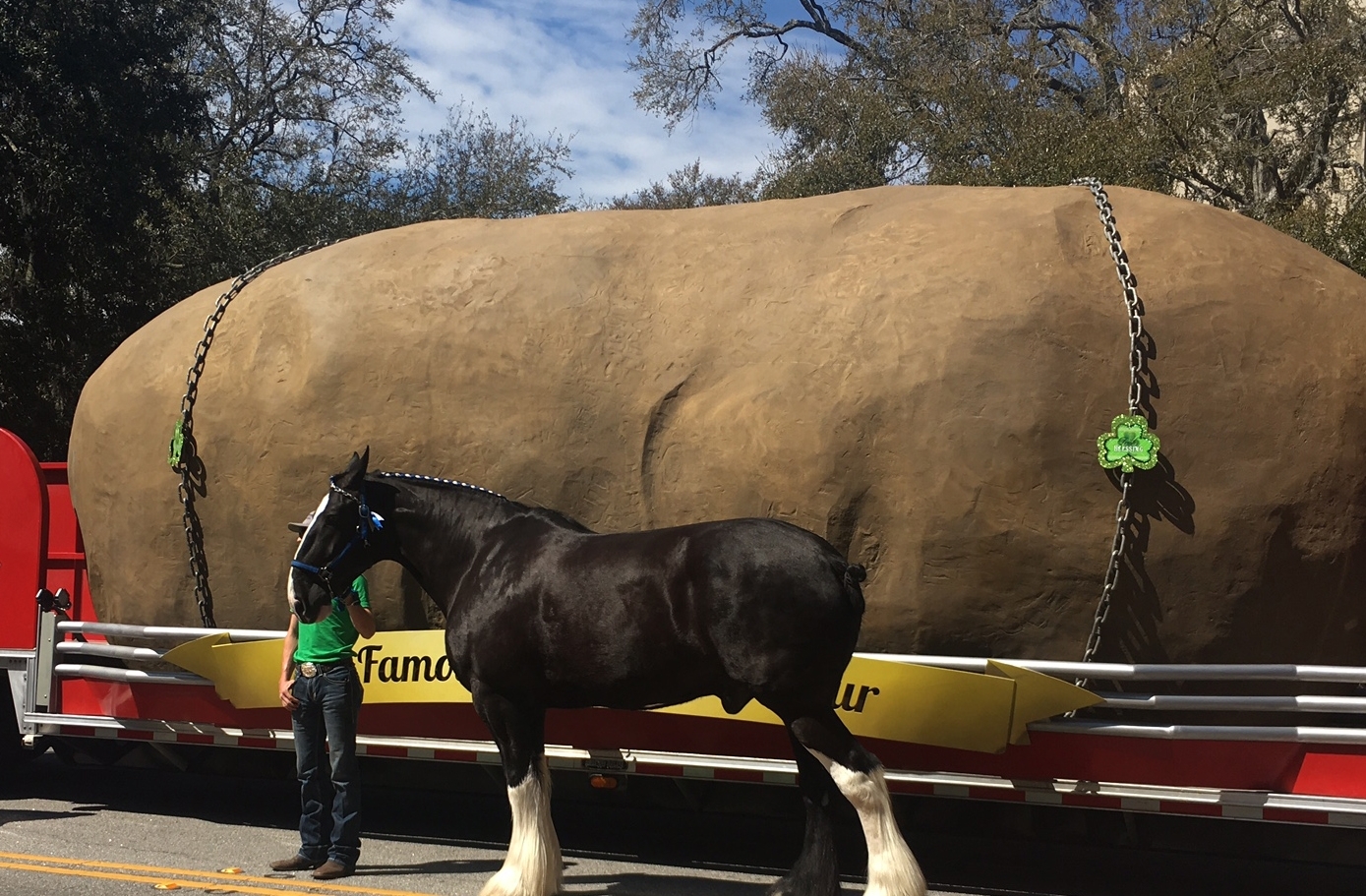 The Hilton Head St. Patrick’s Day Committee was fantastic and they even invited the team to pre and post parade events! On Saturday night the Boston Police department Pipe Band played at a local Restaurant Riley’s. They even presented the restaurant owner, Tom Riley, with a drum head! Tom Riley, originally founded the St. Patrick’s Day parade 35 years ago. This parade has grown over the years and we were able to see just how big it has expanded! At the parade there were 30,000-40,000 people lining the streets dressed in green!  There was a wide range of floats and automobiles in the parade, including the Oscar Mayer Wiener mobile, Express Clydesdales, and floats from local organizations. It was a sea of green fans as the truck drove through the parade and excited spec-taters cheered, and clapped as we passed! After the parade, the team was invited to celebrate a successful parade with the committee members at Riley’s Restaurant. We had a fantastic time at the well-run parade, and we felt honored to be included in meetings, and celebrations with the committee. Hilton Head Island was the perfect location to have our first out-of- state events of the 2018 Tour!

Were currently on route for Pittsburgh, PA for another St. Patrick’s Day parade! Pittsburgh has a large Irish community and the parade is one of the largest in America! The tour’s PR Rep, Sue, Kennedy will be there, along with Commissioners Dan Nakamura and Richey Toevs! The commissioners and team will also be attending a NCAA March Madness game while they are there! We are having a great 2018 tour and we can’t wait for the adventures to come! Stay tuned with the blog, and make sure to follow our social media handles