A Big Week in a Big City!

Adventure: an exciting or unusual experience. What better word to describe the week we just had?!  Try to imagine navigating the busy streets of downtown Chicago in a wide load semi truck! With our adventures quickly stacking up, the checks on our tour’s “bucket list” keep on coming! Getting a police escort-Check! Meeting more prestigious big wigs- Check! Traffic Jam- Check! Sampling authentic Chicago style food- Double Check!  Getting front row seats to a chef throw down- Check!  It was hard just to keep up!

We were thrilled to start our weekend off in Wisconsin. What a more perfect pair than cheese and potatoes? Our loving fans were delighted to see our big spud and we were just as delighted when Todd Schmidt, the Foodservice Representative for the Northeastern states, dropped in to meet us.  Finishing our visit off at a local Piggly Wiggly, we were off to the Windy City where we will be planted for the next three weeks! 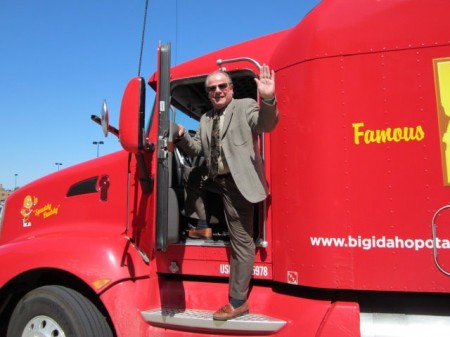 Upon arriving in Chicago, the worker in the toll booth took one look at our potato and called for a police escort to get us to town safely. After a few minutes, a police car rolled up and we followed the trail blazer down the hectic highway. With our heads growing bigger, we safely made it to town and parted with our newly found comrade. We settled in for the night, eagerly awaiting our next event.

Pulling into the parking lot of a Jewel Osco our eyes bulged to find a mass of people lining the store. The fans had obviously been there for several hours as we noticed they were all stocked with their own snacks, blankets, and chairs. Our heads grew another inch as we took in the flattering line. Jumping out of the truck we braced ourselves for the rush of our excited and very loyal fans.  When we noticed the line stayed stationary, we were quick to learn of another event taking place at the store. Bethenny Frankel, from a hit reality TV series Bethenny Ever After, was due to be at the store in another half hour to sign autographs on her newly released bottles of Skinny Girl cocktails. After our heads returned to normal size, we interacted and took pictures with all of our shocked admirers. We were humbled to hear many people say, “This is the best day ever! Meeting Bethenny and a Giant Potato!” That’s something you can’t say every day! After the event, we got to experience our first official “Chicago style” hot dog from Portillos restaurant, and later a pizza from Ginos East, a famous Chicago hot spot. Now we are proud to say we have sampled two of Chicago’s signature dishes! 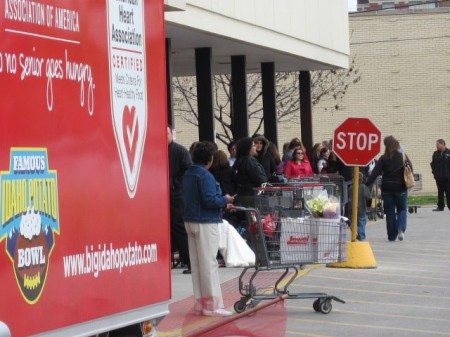 Friday morning we got our first taste of just how unfriendly city streets can be to semi trucks! Trying to make a tight turn that was bordered with guard rails; we brought traffic to a standstill. Once we found out the rails would not allow us the space we needed (mid-turn), Kaiti had to jump from the truck to back up the cars that had lined up behind us. While she fought trying to rearrange the stopped cars to give Paul some back up room, he fought through the merciless turn. Eventually, the 30-point turn was no match for us and Paul prevailed!

Later that afternoon while being stationed in front of a Meijer, we got a visit from a very entertaining character. Fred Young isn’t someone you have most likely heard of, but certainly someone you have heard from! He is the voice of over 35 pinball games nationwide and can impersonate 998 voices! He entertained us with skits from TV shows and movies such as Family Guy, The Simpsons, Star Wars, The Pirates of the Caribbean, and even Elmo. Fred was fantastically talented and kept us very amused. Of course we couldn’t end the day without meeting one more Idaho Potato Commission “big wig”. Don Odiorne, Foodservice Vice President, stopped by and introduced himself. It is so nice for us to finally put a face to all these names we keep hearing of! 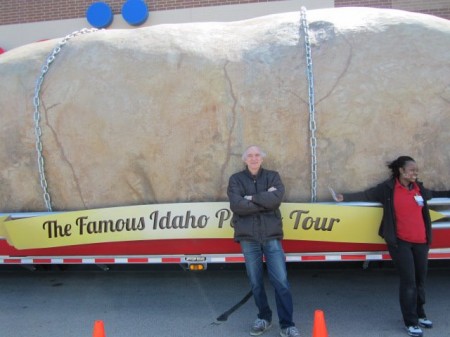 Although we had a fun week, Saturday morning took the cake! We positioned ourselves in front of Ina’s restaurant bright and early. She gave us a warm welcome and served us an outstanding breakfast. Ina has been labeled the “Breakfast Queen” and we learned it is a well deserved title! Kaiti was in heaven while she devoured her Pulled Pork Hash. It was a scramble of pulled pork, Idaho potatoes, onions, peppers, cheese, topped with two poached eggs, and a side of sweet BBQ sauce to pull it all together.  Yum!  The restaurant was warm and friendly and Ina is sure to enforce her no cell phone policy. “Everyone in here should be able to enjoy each other’s company and eat breakfast without the sound of cell phone rings from every direction.” She explained. It gives that restaurant a very loving and peaceful atmosphere.

After breakfast our morning was just beginning! David Burke, head chef at PrimeHouse in Chicago, showed up for a chef throw down with the Breakfast Queen! Ina had to make the meat and David had to make the potatoes. Both of the finished products looked fantastic! To see their finished dishes visit www.watch312.com, David’s online show. 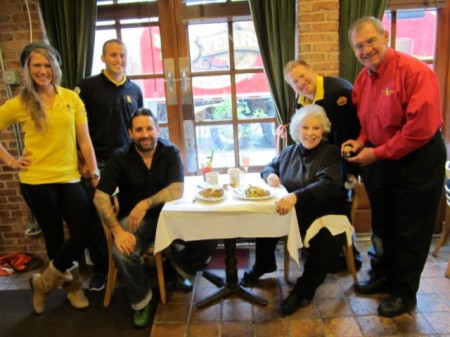 As you can tell, we had a full week with plenty of stories that never stopped coming! Where are we heading now? The National Restaurant Association Tradeshow!  We are so excited to be a part of this tradeshow so be sure to stay tuned to our Facebook and web page to learn why.