A Change of Pace in McCormick Place

The Big Idaho Potato Truck and the self-dubbed “Tater Team” were brought together for one reason and one reason only: to promote the rock star that is the Famous Idaho Potato. But alas sometimes Murphy’s Law will try to obstruct even the purest of missions no matter how sincere the goal. Now I might quickly add, Spudnation, that you should not fret for this intro is not meant to scare you.  You see, this “Murphy” guy is no longer around.  Therefore his law did not account for two very recent phenomena: a six ton Idaho Potato and an unstoppable support crew of misfits.  Disaster may have been looming at every step but it fell short at every turn at the hands of a deeper resolve.  In the end, after a little turbulence, the crew and the unstoppable Spud rolled into the safety of McCormick Place’s vast chambers… its temporary home.  And herein lays the change of pace.  With Idaho’s pride tucked away in preparation for the National Restaurant Association, the Tater Team was relieved of their travel duties, and sought out their own adventures in the streets of Chicago. 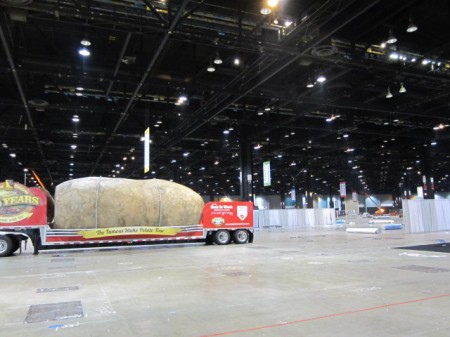 Our truck was the first one in and will be the last one out. Now that is dedication.

Chicago’s weather for the last week was bad enough to keep even the most adventurous souls inside.  So inside the Tater Team did stay.  “Inside where?” you ask, well they thought that Chicago’s improv clubs and fine dining establishments were a good place to start.  Second City’s legendary establishment echoed with Kaiti’s equally legendary laugh, Portillo’s Italian beef and Chicago-style dog added a well earned inch to Paul’s waist line and Ellis showed no shame as he put away half of a large-Lou Minalti-butter-crusted-deep-dish pizza pie.  Needless to say, the Tater Team is more LARGE and in charge than ever before.  But you won’t hear them regret it one bit. 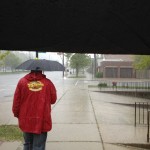 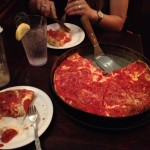 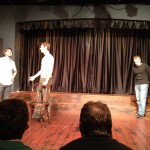 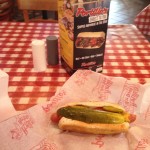 Paul battles it out in a torrential downpour.  Once we get smart we make it over to Lou Minalti’s Pizzeria where there is not only delicious grub, but it was dry! The third picture from the left shows a local improv group at Second City. And the last photo is an official, Chicago-style dog from Portillo’s.

The long layover in the Windy City caught the eye of a key figure that made a very special appearance in order to ‘ketchup’ and take in the sights with the Tater Team.  It was a man who needs no introduction, for he is an iconic Idaho representative: Spuddy Buddy.  Spuddy literally hopped on ‘board’ with Kaiti and Ellis as they wheeled him around Chicago from the Lincoln Park Zoo to Navy Pier.  Stories were shared and memories were made as the old friends longboarded on the boardwalk, sandwiched between Lake Michigan and the Chicago skyline.  Rumor has it Spuddy is going to be making even MORE appearances throughout the tour! Don’t miss out and make sure you watch for the Adventures of Spuddy album on Facebook. 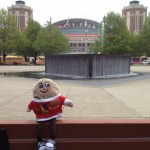 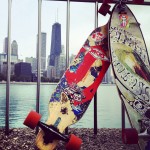 On the left, Spuddy Buddy poses outside the famous Navy Pier.  On the right are the transportation tools the Tater Team used to show him around.

By the time Friday rolled around the Team was itching for action! They made their way down to McCormick Place to get their hands dirty while getting the truck clean.  The team worked vigorously to buff the truck until it was ‘show worthy’.  Their work was only slowed when new fans stopped by to talk about and admire Miss Idaho and the Big Idaho Potato.  Team manager Laura, from Foerstel, arrived soon after the fresh coat of spit-shine, and after a month of conference calls and iChat dates, the full team was finally reunited. 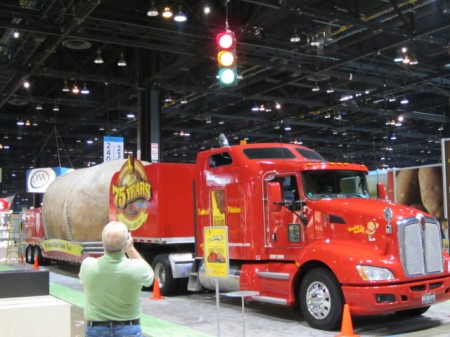 The man in the green shirt stops at the traffic light to take a picture of the Big Idaho Potato Truck looking all fresh and clean.

Saturday marked the beginning of a promising weekend.  After a week of preparations, McCormick Place came alive with the opening of the National Restaurant Association.  The once empty halls were filled with hundreds of vendors that were swarming with thousands of potential clients.  Never has there been such a high density of food samples per square foot, and the Team made it their mission to test every one.  But after two days of valiant eating, they have reported that they are not even half way done with the event. It looks like we may have to chalk up a victory for the NRA and deliver the Tater Team their first defeat.  But while the food is a definite highlight of the show, it is by no means the main attraction.  From a very small and unofficial sample of the NRA Show’s population, we were almost unanimously voted the unofficial “Best in Show…case” (we cannot guarantee that there was no bias used in the calculation of this result).  The Big Idaho Potato Truck dropped jaws, cracked smiles and brought out the little kid in everyone that passed.  But like any main course, it is always better accompanied by sides.  In the case of our Giant Spud, we had two! Spuddy Buddy came out to celebrate and take pictures with his adoring fans and the Idahoan occupied the space next door where they prepared an outstanding array of Idaho Potatoes.  To some it was just simply overwhelming.  But that is just how Idaho Potatoes roll. 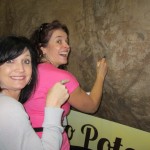 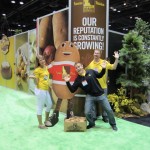 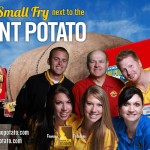 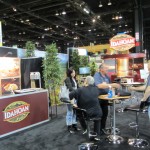 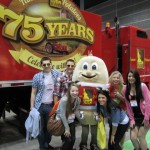 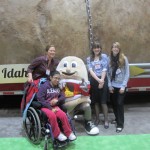 From left to right: The amazing duo from Foerstel, Laura and Linda, touch up the Giant Spud before the NRA; the Tater Team goofs off with the Spuddy Buddy cut out; Frank Muir, Laura, Robin (Kaiti’s sister) and the Tater Team do a group shot at the IPC Photo Booth; the Idahoan is flaunting their delectable line of products next door; Spuddy Buddy poses with some fun fans from the show.

Though it was not the typical week of appearances, it was a unique change for all of those involved.  The Idaho Potato Commissioners, the management crew at Foerstel and even the Mayor of Chicago got to experience what the Tater Team goes through every day.  And while it was real nice of them to share the experience, the Team better hope that Frank, the President and CEO of the IPC, and his lovely wife do not decide to run off and take their places for the remaining six months. 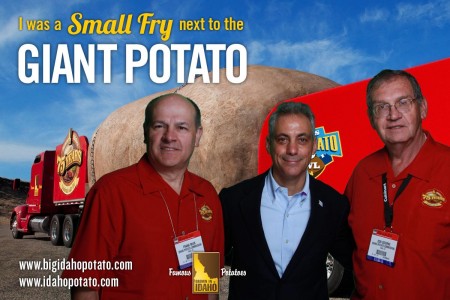 Chicago’s Mayor (center), Rahm Emanuel, chose the IPC stand as one of only six to be visited during the opening ceremonies.  He is accompanied by Frank Muir (left) and Don Odiorne (right) from the IPC.