This past week we drove from Winona, Minnesota to Reno, Nevada! Although the majority of the week was dedicated to driving  across the country, everyday is an adventure when you’re traveling with a 4-ton Tater! We are a sight to see on the road! We see the best reactions when we are driving down the highway! Our driver, Melissa, gets some good entertainment as she drives because fans are always waving, videoing and honking as they pass.  People also flock to our spud whenever we stop! It’s crazy how much of a buzz our spud creates wherever we are! 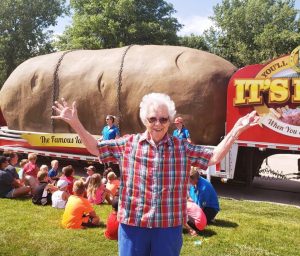 This week we started off in Winona, Minnesota after attending the Steamboat Parade! We went from Winona to Grand Island, NE for our first drive day! During that drive, we made a special stop at an assisted living center in Fairmont, NE. The employees and residents at the Fairview Manor were so excited to have the Big Idaho Potato and Tater Team make an appearance! As soon as we pulled in, everyone greeted us and gave us a warm welcome! The Fairview Manor is really special because it is an assisted living center combined with a daycare so the elderly residents and children can spend time together! Students from the daycare came out and the Tater Team read the book the “Enormous Potato”! We also passed out postcards and potato pins and got a tour of the assisted living facility! It was a quick stop but it was so nice to meet everyone from the center! After our stop we head to Grand Island for the night.

The next day, we drove from Ashland to Denver, Colorado! Jessica’s Grandma, AKA the “Sherlock of Spuds” lives in Denver so we were able to spend time with her on our day off! Grandma Betty is a Big Idaho Potato super fan and she loves to plan soirées and parties! She planned a “Meet and Greet/ Spud Soirée” for the Tater Triplets during their day off! Grandma decorated her whole apartment with Spuddy Buddies and Idaho® Potato decorations! She even made special potato dishes like “Famous Idaho® Potato casserole”! We had a TATERific time and it was great to see our spud buds!

After a fun day off, the team drove on down to Reno, Nevada for the  Reno Rodeo’s 100th Anniversary Parade! We attended the Reno Rodeo last year and we had such an amazing time that we had to go back! This year we wrangled up our 4-ton tater and brought it to the Reno Rodeo parade! We had a BIG group this year because we were joined by Ron “The Tater Toter” and his girlfriend, Thelma! Then a few of Melissa’s family and friends surprised her by flying to Reno! They all joined us during the Reno Rodeo Parade and we had a blast! The streets were lined with SpecTATERS cheering as we rolled down the route! Tater Twins, Jessica and Kaylee are professional potato riders and they rode on top of the Big Idaho Potato for the entire parade route! After the parade, the team was able to watch the rodeo in the VIP section thanks to the passes given to them by the Reno Rodeo! The team really enjoyed their time in the parade and watching the Reno Rodeo!  Reno Rodeo is a FRYtastic event that we really enjoyed attending!

This week the team also released a new video! They did an Aladdin spin off video that was pretty magical! The Tater Team has so much fun creating Aladdin and loves making fun videos! We are always releasing new content and videos so make sure to follow our pages social media pages to see our new releases! FB: @bigidahopotatotour Insta: @bigidahopotato Twitter: @bigidahopotato! We hope that you enjoy following our adventure! We are so grateful to all of our followers and fans! Thanks for reading, until next time!