A Potato in the Smoky Mountains

We don’t often get to visit small town U.S.A. Much of our time is spent at larger events in larger metropolitan areas. When we do happen upon a smaller town during our tour, there are usually only a few things to do. There are those times when we have a day to ourselves, where we can explore or otherwise enjoy an outing or two on a day off. These are generally filled with enough time to “take it all in.” I would have thought that there couldn’t be a small town with too much fun to be had and too little time to have it. Not when we had four days to visit. 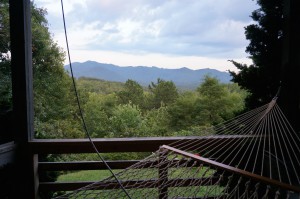 Arriving in Bryson City, NC, we immediately had our minds on one thing, besides the Big Idaho Potato, of course; it was our accommodations. This whole tour has been spent living out of hotel rooms. Now before you feel pity or remorse for us, we have to admit that our rooms have all been nice and left us with very little complaint. There have been missing, however, the kitchens. We have had the occasional, but they’ve been rare indeed. This time is different because we decided to share a three bedroom cabin. This cabin not only had nice rooms for each of us, laundry room, and two separate bathrooms, but had a spectacular view as well. We loved every inch of it, from the full deck complete with hammock, to the hot tub.

There was one thing missing though; the Big Idaho Potato. 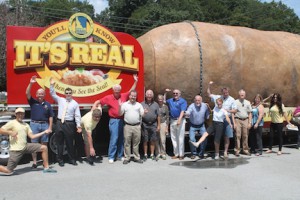 Fortunately for us, there was a fan in Bryson City, ready to help. Teddy had been instrumental in helping us find a place to park the truck. In front of the Smokey Mountain Railroad’s Depot. Now when tourists came to get on or off the train, they would have something waiting for them. The truck and Big Idaho Potato took a rest there, while we took in the sites. We first were invited to be guest speakers at the local Rotary Club. This is always an honor, for each of us. It’s nice to think of your job as being so interesting that you can share it with others, with ease. The Club Members were awesome and Lee Allison, Manager of Nantahala Gorge Canopy Tours gave us a go at their Adventure America Zipline Canopy Tours, zip line. With thirteen runs, this was an awesome day. We took the train ride into the gorge, with a connection with the zipline. You ride the train out and the tour brings you back. It was an awesome day for sure. Our guides were fun and very safe. The train ride was in an open air car and the weather was perfect for the ride. We couldn’t ask for more. 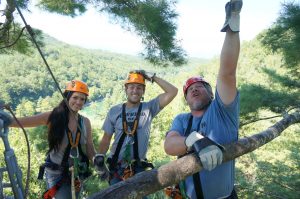 Another day was spent on a hike to the tunnel on the road to nowhere. This is where Ivan and Kristie decided to try their hand at building a survival shelter. I didn’t go on the hike myself, because I had some urgent business with a hammock, which needed that quiet time. I heard them say that the hike was awesome and that everything had gone smoothly. (a bout of allergic reaction response to what one would suppose would have been some form of contact with poison ivy, would suggest otherwise.) My afternoon with the hammock went well too. (Sans Fran Poison Ivy.) The cabin was the perfect place to invite Teddy over, for dinner. He brought most of it and I did most of the cooking. I don’t remember who did the dishes but as long as nobody else remembers, I may as well claim it was me. 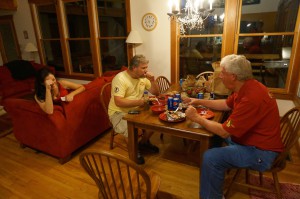 It was a fantastic time for us in Bryson City, but we couldn’t stay forever. We had a Boomsday to celebrate. Teddy helped us get the truck safely out of town and we headed down the road.

Knoxville, Tennessee is a wonderful city to visit. We’re no strangers for sure. This time around however, seemed a bit more crowded.

We lined ourselves up along the Tennessee river with the help of Kellie Ryman. Kellie was instrumental in helping us get both into as well as safely out of, the event area. Boomsday is a really neat festival which included music, food, assorted venders and to cap it all off, Fireworks. Now let me start off by saying that this years attendance must have set a few records. I say this because I walked to the festival, entering it on the opposite side of where the Big Idaho Potato was parked. I thought it would be fun to walk the whole length of it and see what all there was to do. It was fun enough, but I couldn’t see one side of the street from the other. There was more people than there was walking space. People were filling the empty spaces because the Fireworks show promised to be the best. As I made my way through the crowd, I couldn’t help notice all the college age attendees. Perhaps the fact that the next day was Game day at the university of Tennessee, helped boost the numbers. Which ever the cause, the effect was clear; a lot of people were going to see the night light up. 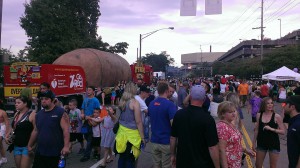 Boomsday can easily boost one of if not the best, fireworks show in the U.S.

The show started at 9:00pm, with a bang… Literally.

We had the best viewing location on dry land, sitting on top of the Big Idaho Potato. The fireworks show went on for almost twenty minutes and included a variety of different types of explosive displays. There were so many going off for so long, that a haze of smoke ran into the skyline. Music played in conjunction with the show, often speeding up or slowing, in tandem with a song. Hip-hop, Country, Rock, and even traditional National hymns, blared out from the speakers lining Volunteer Way. These weren’t coming from just one launching point, but rather seemed to span the length of the bridge. There was one particular part, called “the water fall” in it’s description to me, that I found the most beautiful. Imagine a white towel hanging over a tub; now replace the white towel with white sparks and replace the tub with the bridge and you kind of get the picture. It was amazing to watch and neat to hear the Boom’s that must give the event it’s name. Labor Day in Knoxville was a blast. 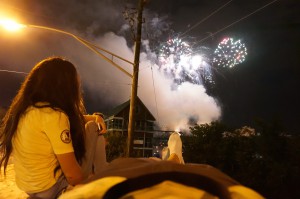