After our event in Santa Rosa, California, we crossed the country to St. Louis, Missouri for the Holiday weekend! We celebrated America’s Birthday in a celebration on the 3rd and during a parade on the 4th of July! Upon our arrival, we were positioned in a prime location in front of the Town Hall by the Kiener Plaza! For the celebration, we were parked next to fellow road warrior and food mobile the Oscar Mayer Weinermobile! There was a large crowd that came over to see TWO oversized food mobiles and get a weenie whistle and Big Idaho Potato swag! The team met so many nice people throughout the night and they passed out Big Idaho Potato postcards & potato pins so fans could remember the monumental day when they found our truck! We also met some Idahoans in St. Louis and we invited them to ride along with us the next day during the parade. We met a couple from Fruitland and a family from Boise!  B.J. Rain, from Boise, works for the Idaho Press and twitted about our spud to all his Idaho friends and followers! America’s Birthday celebration was an awesome event with live music, vendors, and they even had hot air balloons glowing throughout the night. It was a great way to kick off the weekend and get everyone excited for the Fourth of July parade the next day! 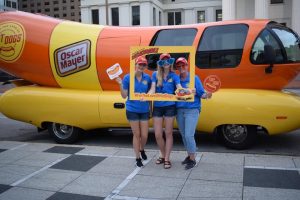 The next morning, the team received an order of Billy Goat Chip Co. potato chips just in time for the 4th of July parade! The Billy Goat Chip Company is based in St. Louis and they are a chip company that only uses Idaho® Potatoes for their potato chips! Their chips are so delicious the Tater Team wanted to make sure to have some to pass out to SPEC-TATERS during America’s Birthday Parade! The Tater Team also had a BIG spud squad join them on parade day! We did an internet competition for fans to ride-a-long during the parade! A family from Tennessee won and they brought a group to ride on our truck during the parade. We had our whole squad decked out in Big Idaho Potato gear and red, white and blue! There was an amazing turn out for the parade and there was some really unique and creative floats! The Team loves to be in parades because we get to see all of the floats and be apart of the celebration! There was a crowd of people lining the streets watching the parade! We went down Market street and had a great view of the Arch on our way down! The Tater Twins walked along the route and passed out the potato chips to excited fans! At the end of the route, they had camera crew and common-TATERS talking about our spud! There was a really positive reaction to our potato! The crowd in St. Louis was great and it was a fun city to explore! 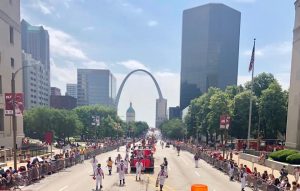 After the parade we parked in Collinsville, IL, outside of St. Louis at the World’s largest Ketchup bottle because it is the perfect place for photo opps for spud-admirers! After a day off in St. Louis the team head up to Cleveland and now we are on our way to Connecticut! We are going to Farmington, CT for the Spudman Open, a golf tournament for the produce industry!  IPC vice president of retail Seth Pemsler,  will also be coming out from Idaho for this event! The Tater Team is so excited to bring the Potato truck to the Tunxis Country Club and to golf their way to first place! The Team had a great time at the tournament in 2017 and they can’t wait to attend this year!

After the Spudman Open, the team is going to cross the country to go to their IdaHOME! We are bringing the truck home so it can be used in the Idaho Potato Commission’s next commercial! The team is excited to spend some quality time with friends and family! They are eager to experience some summer time in Boise! Idaho is a special place and they can’t wait to hike Table Rock, go to the farmer’s market, and float the Boise River! The tour is flying by and the team is making sure cherishing every moment on the road! Everyday we make a new memory and meet amazing people! We hope you enjoy watching our adventure because we’re having a blast on it!

Thanks for reading, have a frytastic Monday!