After having a blast at Derby week, the #tatertriplets made their way to little Salyersville, Kentucky! We were invited to IGA Grocers which is a small grocery chain with 10+ stores throughout Kentucky. We got to meet a few of the owners from various stores around the area and were welcomed with southern hospitality! At the event, we had #potatohole for the kids and handed out free Idahoan mashed potatoes, post cards, and pins. It was fun getting to know the folks from the town and was cool to see that everyone knew each other. Small towns are some of my favorite stops because of this reason. We even had a special visitor named Nathan Arnett from Salyersville who was on The Voice, a singing competition show on NBC. We were having potato karaoke when he came by and he absolutely killed it on the mic! It was a tater-iffic little stop and we can’t thank everyone in town enough for being so kind to us. A special shout-out to Ritt Mortimer and Don Gardener for showing us around the area.

We made another stop in Kentucky the next day in Lexington for the potato’s first ever graduation photo shoot! One of our SUPER fans named Phyllis contacted us on social media and wrote that if the potato ever rolled through her town that she would like us to make a stop. She saw us a few years ago on the highway and had never had the chance to see the truck up close. She sent us a video of her reaction and it is probably my favorite fan video to this date. We love our fans so of course we had to make a stop! She had recently graduated from the University of Kentucky a week prior and took some photos in her cap and gown with the truck. It was pretty epic because she even had a potato on her grad cap. It meant a lot to us that she was such a BIG follower of our adventures and we loved meeting her!

That same day we took our tremendous tater to the racing capital of the world, the Indianapolis Motor Speedway! To get into the fan area, Melissa the #spudracer got to the take the truck for a little spin on the track. Click here for the Facebook video. It was one of those moments where you think… is this really happening right now? Why yes, we are driving a giant potato on a track where world class Indy Drivers have driven before! It was definitely a check off of the bucket list for her and a great memory for all of us.

We were in Indy for the Indy Car Grand Prix and to cheer on our “Speedy Spud” Sting Ray Robb. Sting Ray, which is his legal name, is an Indy Pro 2000 driver from Payette, ID. This is the third race of his that we’ve attended and our second year at Indy. He sure made Idaho proud yet again by getting another podium finish in second place in Race #2. So far, Sting Ray has made the podium every time we have attended his race.. coincidence? I think not. We even got to go up to the podium with him and his family for his special moment! 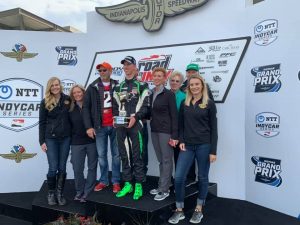 The #taterteam also had a blast talking with Indy fans in the fan area! We saw a lot of people who had seen us the year before and it was great to see familiar faces and hear how excited they were to see us again. Spuddy Buddy also made an appearance and got to visit pit row and walk on the track as well! Thanks again to Joe from IMS and Sting Ray and his family for letting us be a part it for round two.

Until next time potato peeps!