The Potato Barge Around Manhattan

A few years ago the Big Idaho Potato Truck made an attempt at getting a selfie with Lady Liberty but was so far away at it’s closest pass, that the Monument was lost in the background. New York is such an awesome place to visit too, that we always try to find reasons. Finding reasons, it turns out, isn’t difficult with New York being our number one purchaser of our best spuds. What is difficult however, is fitting on the narrow roadways. It’s not easy being twelve feet wide and seventy-two feet long. It was starting to seem like everything we wanted to do in the Big Apple, was woefully out of reach. Enter stage left, a Brooklyn barge company, Hughes Marine. Hughes Marine was able to set aside a barge which totally fit our needs and even knew how to get our big lowboy trailer onto it. With a little patience and a bit of good timing, we were able to match up a high tide with our ramp level needs. Hughes Marine even knew who would love to “Tug” our Spud around Manhattan. Enter stage right, Coastline Marine Towing.

With that part out of the way the Spud Studs and I had time to mingle with a few of the “behind the scenes” people, including actual Idaho Potato Farmers, Randy and Karlene Hardy, and Ritchey Toevs. Dan and Colette Nakamura, and Frank Muir from the Idaho Potato Commission. All had answered the invite to join us there for the experience. (Ok, admittedly, we’re far more behind the scenes than they are, heh heh.) Also have to shout out to the two ladies who keep the cogs turning…Sue Kennedy our PR Director and Laura Martin, our Tour Director. We all enjoyed a night out on the town, dining at The Smith. The food was fantastic to say the least, and the company was even better. It can get kind of lonely out here when nobody from the Idaho Potato Commission comes to visit us. We stayed out late seeing as much of New York City as we could, even though the morning bell was tolling around five a.m. (You just can’t pop into Lower Manhattan on your first ever visit and go right to the Hotel. There’s time for sleeping when you get back home.) 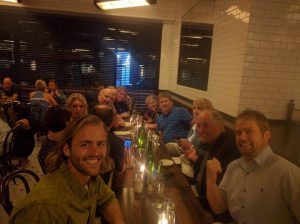 Five a.m. seemed like it came seconds after my head hit the pillow and in all fairness, it kinda did. We started the morning out with a hankering to catch up to our “Large Barge,” and headed out to meet our morning boat ride. New York Media Boat met us out at Pier 25, which is a really fun place to take the kids. (not at five a.m. of course, miniature golf was still closed.) Mark Von Holden joined us so we could be sure to have plenty of pictures and video. (You’ll find out later that our in house photographer Ellis, was planning on getting wet.) The boat ride was phenomenal alone, without the Potato. They did a great job of taking us to all the interesting and fun places. Our Captain, Eric, was both knowledgeable as well as fun. We spent time on both the East River as well as the Hudson. Seeing the cities and Burroughs from that vantage was a real cool experience. The boats are fast enough to get from one side to the other in less than ten minutes. 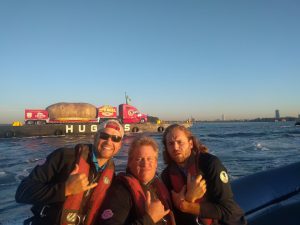 We didn’t start out sightseeing of course, because we all had an agenda. The Big Idaho Potato was taking the Spud Studs, and Larry, on a special little journey and this was that moment we’d been desperately waiting for.  Catching up to the Big Idaho Potato as it was moving right underneath the Statue Of Liberty. I have driven the Spud all around the country for so long now that even though it’s not mine, it really feels like it is. I think that the moment I first glimpsed the Spud out on the water was tough emotionally due to the excitement. If that were true, it didn’t come anywhere near the feelings of emotion when I finally saw it’s first pass underneath such an awe inspiring icon of the very country I love. The job I love meets the Statue that represents the land I love. (I didn’t cry of course, cuz I’m a man, but a wave did splash my eyes making it kinda look like I did.  …but it was just a wave…that didn’t get my shirt…only my face…right around my eyes.)

We followed our big tater truck all around Lower Manhattan, both up the East River as well as up the Hudson. It was indescribably neat to be out there where so much of our nations history was written. One of those favorite pass times of ours involves getting iconic pictures and here we were, living it up. The boats were fun for sure, but you just can’t appease the Spud Studs and Larry with mere rides upon water craft. Oh no, you cannot appease us in such ways. Were we to be perhaps “piloting” said water craft, perhaps. This was not the case and we were not to be out shined by Eric. We were going to see NY City in style, not in a limo, not on a yacht, but on jet skis. 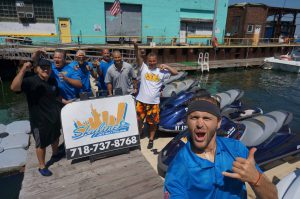 New Jersey played a part in this leg of our journey as the Spud Studs and Larry headed out with Dan Nakamura to get our groove on. (Our Water Bike Groove) We headed over to Skyline Jet Ski Tours, and met up with our guides, Gerry and Eric. We got our paperwork in order, received our training, and became versed in boater safety. Life vests donned, we headed to the dock and were each lent a bit of NY coolness, a Jet Ski. I cannot speak for everyone as to whether or not they enjoyed this part of the day, because I do not know for sure. We had to not only stay several feet apart, but nobody could stop grinning long enough to get in more than a few laughs. I will speak for myself however. I had so much fun I actually forgot how old I am and found myself acting like that foolish twenty year old that I used to be who feared not death, feared not danger, but only lived life to it’s most exciting possibilities. I haven’t felt that way in years. (I was never in any danger, but I had fun regardless, with no thought as to what if…) We got to again meet up with our Big Idaho Potato Barge and then got the tour of both rivers. It’s been several days since those moments and as I am writing this I still can’t believe how much fun it was. Skyline Jet Ski Tours was very accommodating and I do appreciate them putting up with me and my “And Larry” nonsense.

We still had plans to see more of New York City and had to say goodbye to the Jet Skis. A ride on the Staten Island Ferry, gave us our last glimpse of the Big Idaho Potato Barge. We weren’t free to just do our own thing however, as there were so many media inquiries and interviews that Sue, Laura, both Spud Studs and myself each had to handle them. Normally we have no more than one or two. We certainly didn’t mind but it did teach us a thing or two about being more prepared. Fortunately we were able to handle it all. Quick thinking and the fill in from Laura Martin, saved the day. I dare say though that if our problem is too much attention, then we have no problem. We totally want that same loving response from everyone. Handling the media on the way back to the hotel left us with very little time to prepare for our next activity. We arrived still dripping from the jet skis at the hotel for a five minute shower and a change into dry clothes. We then met up with the rest of our group so we could take a tour of World Trade Center Tower One. I cannot express the awesomeness of the view there and also don’t want to give any spoilers as to what it’s like. I will say this however, that seeing the 360 degree observation deck view of the area was totally awesome. It is definitely worth a look-see. The tour itself is a sobering reminder of what happened to our nation and the events which led to a rebuilding of the World Trade Center site. I would go more into what it meant for me, but I think each of us should handle our thoughts in our own way. For myself, I do so in silence, only looking forward with hope and only looking back remembering those who were lost.

We had one last dinner together, this time at Balthazar. The food was great again as was the company. We had one last event here and sleep was the order of the night (after of course, a walk down to Times Square). We were there for other reasons too. Twelve thousand pounds of potatoes were donated by the Idaho Potato Commission to Holy Apostles Soup Kitchen. So while “And Larry” was getting the Big Idaho Potato off the barge, the Spud Studs and the rest were off to volunteer for the lunch crowd at New York’s largest emergency food program.  They had a lot of fun, while also being humbled by both the need as well as the joy that comes from giving and helping out. I joined back up with them just after, with the Big Idaho Potato, no longer a barge, once again being a truck.

We had to say goodbye to everyone and I had to get back to the Spud, so I could get some more sleep. Oversized loads only get to go into and out of New York City, at night. I needed my beauty sleep. Thanks, Pete from Rite-Way Transportation, for being a rockstar getting us “the special”!

A big thanks goes out to everyone who made this whole event possible. The reaction and media coverage was only the icing on already wonderful and delicious cake. (Making it on the New York City Cab Reel..was the cherry on top of the icing! So fun to watch it every time we had to jump into a cab!)

Thank you all for being our fans and a big thanks to the people of New York and New Jersey, for putting up with all of our shenanigans.